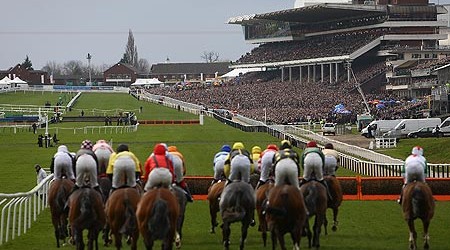 Over the next four days in a quiet corner of the Cotswolds called Prestbury Park, almost 250,000 people will descend on Cheltenham Racecourse for the 2014 Cheltenham Festival, the annual blue riband event of the jumps racing calendar.

With 27 races over the four days and over 300 horses declared to take part, this is not just the opportunity for horses and their connections to carve out their own piece of history, it is also one of the betting industry’s busiest weeks of the year.  And depending on the results of the big, marquee races, the short-priced Cheltenham favourites and renowned Irish gambles, the bookies could be rubbing their hands with glee or licking their wounds at the end of this four day betting frenzy.  With an exciting week of racing on the cards, some competitive fields in the big races and the return of some Festival favourites, bookmakers are predicting record turnover at this year’s Cheltenham Festival.  With temperatures forecast to soar to 16 degrees Celcius, this year’s Festival could be the warmest for 40 years and that heat could be reflected in the betting with some industry experts predicting that close to £300 million will be wagered on this year’s Festival.

Traditionally in the UK it is the Grand National that sees the “once in a year punters” loosening the purse strings and investing a couple of quid each way on a horse carrying their favourite colours, maybe sharing a name with their grand children or ridden by the Champ, AP McCoy.  Sometimes there might be a similar phenomenon, albeit on a slightly smaller scale, if the housewives’ favourite, Frankie Dettori, is riding a good thing in the Epsom Derby.  But Cheltenham transcends this and turns the most unknowledgeable of racing fans into experts of form and judges of equine genius.  Indeed, do not be surprised to be in a pub in London’s Square Mile this week and overhear animated conversation amongst pin-striped professionals about “Big Bucks” and “Annie Power” only to find out that this is not a debate about the investment strategy of one of their biggest traders but about which of these equine athletes will triumph in the Ladbrokes World Hurdle, the feature race on Thursday.

There will be stories told and legends made at Prestbury Park this week.  It may be the 50/1 outsider winning a big race, the background story being an average Joe who bought a horse for nothing that has beaten the multi-millionaire might of a leading owner like JP McManus or Andy Stewart.  It might be a jobbing jockey, usually happy earning a couple of hundred quid a week riding in provincial meetings who is thrust into the limelight after beating Ruby Walsh by a neck up the gruelling Cheltenham finish, joyfully steering an apparent no-hoper into the winners’ enclosure.  Or maybe a young, up-and-coming trainer beating the like of Paul Nicholls or Nicky Henderson and springing a surprise with a horse he quietly fancied, his stable lads really fancied and they all end up dancing around the winners’ enclosure with fistfuls of folding won from the bookies.  Whatever the results, whether the favourites fail or the outsiders triumph, this week will be the pinnacle of this year’s jumps racing calendar.  And come Friday evening, about 6pm, around 20,000 bottles of champagne will be empty, over 200,000 pints of Guinness will have been sunk and the bookies will be crying.  Whether it’s distraught into their empty satchels or laughing into bulging wallets only the fortunes of 27 horses can tell.

In order to be contacted by one of our experienced recruitment consultants and to be kept up to date on all the latest jobs, register now!

At betting Connections Recruitment Services we believe that talented people know talented people. On this basis we are running a "refer a friend" initiative which gives you the possibility to earn €250.

Check out our employer page and see what we can offer your business, helping you to achieve the long term growth your business is looking for using our no risk recruitment solutions.

Find out what we offer to jobseekers, helping you to get the job you deserve and build a career that you love. All of our career consultancy is offered for free.